GOCOO are a bunch of female and male drummers from Tokyo (Japan) who capture their audiences with original grooves woven with traditional Japanese drums, Taikos. On stage the up to 16 artists create a live music-spectacle beyond imagination when beating the hell out of a battery of their more than 40 drums. GOCOO’s mighty beats, juicy grooves and unique poly-rhythms are of such primal nature that they reflect all known music styles and consequently unite people of all ages, ethnic and social roots and of any taste in music. No matter where GOCOO performs, at major World & Roots, Rock & Pop or alternative Music & Culture festivals, in live clubs, classic theatres and concert halls or at techno events, the band takes all audiences on a mesmerizing trip between trance and ecstasy – drumming down all borders between east and west, tradition and pop, rite and party. Newsweek included GOCOO in their all time top 100 list of Japan’s heroes, challengers, pioneers and icons, as “their borderless sound, a mix of rock and ethnic music from around the world, is cherished by international audiences”.

GOCOO define themselves as a “Band” and while usual Taiko ensembles stoically pursue a traditional style, and while others seek new interpretations of traditional Japanese music, GOCOO’s beat exhibits free-spirited Taiko music, rising freely between the East and the West, tradition and pop, rite and party and hence appealing directly to the heart of a broad range of audiences. Although GOCOO’s music is often referred to as crossover or roots music, or even new terms such as Techno- and Trance-Taiko are created to pay tribute to their unique rhythms, GOCOO successfully overcame any stereotyped concepts not only of Japanese drum music and reached their own, independent cult status. 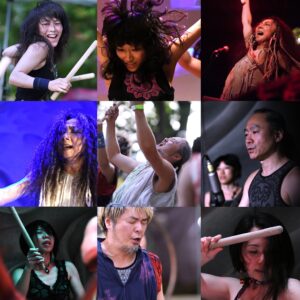 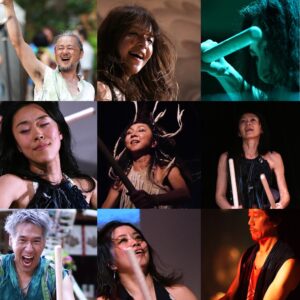 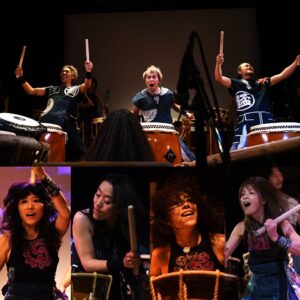 Free of ritual obligations, women, for example, have the majority among GOCOO’s members. Above all the charismatic female lead drummer Kaoly Asano. “The drummers show strengths of young Japanese musicians that are usually indicative of techno pioneers such as Ken Ichi: it’s a mix of Western culture and own cultural customs, moulded into new acoustic forms” says Michael Wenzel of Triggerfish. The sound of GOCOO’s music is so unique that not only the makers of the MATRIX movies discovered GOCOO’s tunes for their soundtracks. The band’s sound can be heard in many computer games and major Japanese companies, such as Hitachi or Nissan, also use GOCOO’s beats for their TV spots.

GOCOO was founded 1997 in Tokyo. They debuted the same year, remarkably unusual for a Taiko group, at the Techno Festival Rainbow 2000. Since then, GOCOO’s frequent live performances at Tokyo’s cult locations, such as Aoyama CAY and Shibuya On Air, are packed with young followers who usually tend to shy away from traditional music. But for them, GOCOO’s trance-like, danceable sound is simply excellent rock- or pop music. GOCOO also appear side by side with other bands and DJs at rave parties or open air festivals such as the Fuji Rock Festival, Asagiri Jam, or the Hotaka Mountain Festival.

Yet, GOCOO are highly recognized among the circles of traditional Taiko: for instance GOCOO performed at the 35th Nihon no Taiko: Taiko ha Koeru (Japanese Taiko Drums Transcend) at the Japanese National Theatre in 2001 and they appeared together with the legendary, traditional Taiko ensemble Kodo at Tokyo’s Earthbeat Festival in June 2005. Furthermore, GOCOO took the chance to perform with several highly achieved artists such as Korea’s Kim Duk-soo of SamulNori, West-Africa’s djembe player Mamady Keita, and Seiichi Tanaka of the San Francisco Taiko Ensemble. GOCOO’s music reflects all these different aspects of musical diversity and interaction.

In 2000, GOCOO’s first solo album Healing Asia Vol.2 was released. It was sound engineered by Shinichi Tanaka and recorded with no over-dubbing. The result was an album of intricate rhythm overlays and powerful grooves rivalling GOCOO’s live performances. November of the same year marked another milestone for GOCOO with their first US tour. 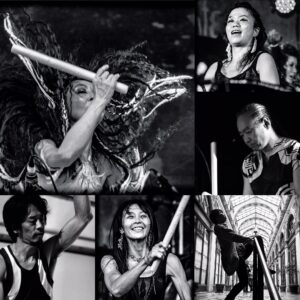 At the beginning of 2002, GOCOO joined Juno Reactor (UK) for a recording session which resulted that same fall in the release of the maxi single Hotaka. In June 2002, Universal Music published GOCOO’s first live album Live’01.

In January 2003, GOCOO performed for the first time in Europe: at the opening party The Cutting Edge of Japanese Underground of Graz as the Culture Capital of Europe 2003 they entertained a five-thousand strong audience. They followed-up with a tour throughout Germany. Another highlight during that year marked the joined recordings Tea House and Tetsujin with Juno Reactor as they produced the soundtrack of the Hollywood blockbusters Matrix Reloaded and Matrix Revolutions. Successively, GOCOO released their first DVD Live’02. In December two new CDs with tracks performed by GOCOO were released: Juno Reactor’s Zwara EP and the Best of Healing Asia: Amatsuchi No Aida.

Prior to the summer tour 2004 including appearances in Germany, Austria, Switzerland and the Netherlands, German television 3sat broadcasted a feature on GOCOO produced in Tokyo. Additionally, GOCOO’s second live album Lovebeat was released. A particular highlight of the tour was GOCOO’s performance at the Swiss Gurtenfestival, broadcasted by Swiss television. While being on tour, GOCOO briefly eloped to a recording studio in Hamburg (Germany) to contribute to the soundtrack of the sequel of one of the most successful role-play computer games that was released in October 2006: Gothic III.

In autumn 2005 GOCOO performed 34 concerts during a two months long tour through Europe and Mexico. And in April 2006 GOCOO conquered for the first time Australia where they performed two memorable concerts at the internationally acclaimed East Coast International Blues & Roots Music Festival before the band returned in June to Europe for the fourth time. They performed in Germany, Czech, Serbia and Greece. The concert in Belgrade was recorded by Serbia’s national TV and later broadcasted.

The latest live album Earthbeat was released in Spring 2007 and the following summer GOCOO came to Europe for their so far most extensive and successful tour through Europe. They performed in 10 countries on the stages of the biggest music festivals like the Sziget or Italia Wave, entertaining audiences of up to 25.000.

2008 marked the next peak in GOCOO’s history. The Band was not only chosen to musically represent the entire Asian continent at the opening event of the UN Conference on Biological Diversity in Bonn (Germany), performing side by side with Bob Geldof and Daniela Mercury. GOCOO also performed in front of the so far largest crowd ever: 30.000 people listened to their beats at the Mawazine Festival Rabat (Maroc). And also for the first time ever, the band performed within one year a world tour including countries of all five continents. 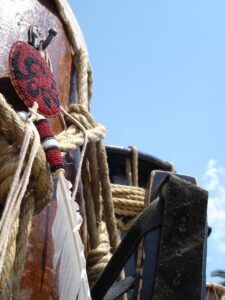 In its edition of July 8, 2009, Newsweek Japan published in a special under the headline “100 Japanese people who overcame cultural barriers and shine in the world” a list pf Japan’s top 100 challengers, pioneers, heroes and icons. Besides celebrities like actor, filmmaker and entertainer Takeshi Kitano or historical figures such as Ieyasu Tokugawa, the band GOCOO was also included into the list, as “their borderless sound, a mix of rock and ethnic music from around the world, is cherished by international audiences” Newsweek said.

After taking a creative break in 2010, GOCOO returned in Spring 2011 with the new live CD and DVD Roots of Joy to Europe and Maroc. GOCOO was honoured to open the Festival Mawazine in Rabat together with music legend Quincy Jones. The Budapest Summer Festival also chose GOCOO to perform the opening concert. During the entire tour GOCOO invited their audiences to write down their messages to the victims of the March 11 earthquake and tsunami on Japanese flags. These flags were given to the victims during a charity concert in the disaster area.

2012 the band returned to Europe for another fantastic Summer tour through 7 countries with many concerts in front of huge audiences. To name a few highlights: GOCOO performed at MONTREUX JAZZ FESTIVAL, entranced more than 20.000 people at BOOM Festival and played once again at Europe’s biggest music event, the SZIGET Festival. After performing in 2007 on SZIGET’s World Music Stage, GOCOO was this time chosen to open the festival’s main stage. With this for the first time ever an instrumental world music artist performed side by side with the international mainstream pop/rock acts on the main stage of the “Best European Major Festival 2011” Award winner. A true milestone in GOCOO’s career. The concert was broadcasted live and worldwide via YouTube. 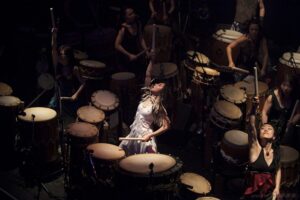 2013 GOCOO returned with their new live CD Eleven to Europe. The band toured 7 countries performing 15 concerts including, already for the second time, a show at Peter Gabriel’s renowned WOMAD Festival (UK). The concerts in Belgrade, Sarajevo und Zagreb were recorded for later broadcast, the concert in Zegrab was also broadcasted live and nationwide. In addition GOCOO performed live and without playback on Germany’s major national TV station ZDF (ZDF Fernsehgarten).

As part of their “Might Beats” Europe Tour 2015, GOCOO performed as the only artist two concerts at one of the biggest music festivals in Europe, the Paleo Festival Nyon (Switzerland). The second concert on July 24 was broadcasted on ARTE.TV. Another highlight was their performance on the Philippines at Malasimbo Festival.

2017 GOCOO celebrated their 20th anniversary! Their first show abroad was in Cebu (Philippines), followed by a Europe Summer Tour with mainly festival performances in France, Germany, Hungary, Italy and Slovenia. Just in time for the anniversary tour GOCOO released a “Best of” album with the greatest pieces of the past 20 years.

Lead drummer, Kaoly Asano, attracts much attention as a female Taiko artist. Whenever not performing with GOCOO on stage, she teaches the art of playing the Taiko at her Taiko school (Tawoo Wadaiko Dojo) in Tokyo. 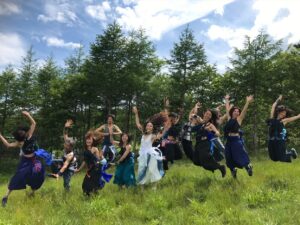